My Chosen Home: Elaine Olson on Citizenship and Advocacy 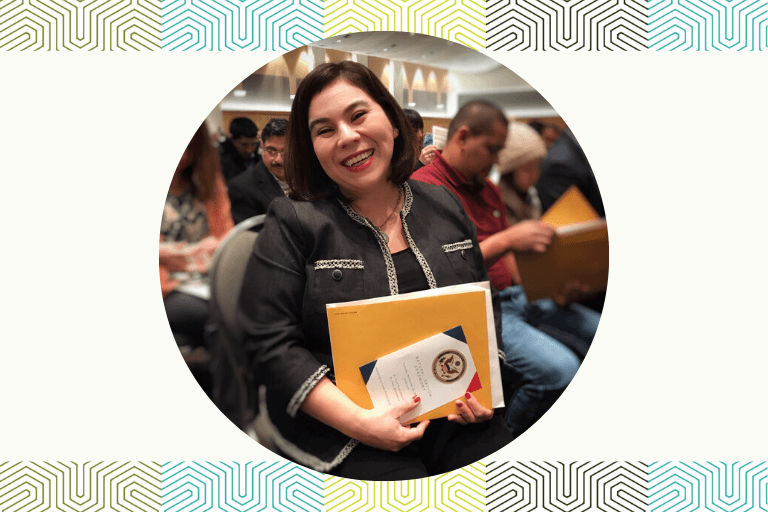 On Nov. 26, 2019 at the Saint Paul RiverCentre, Judge Paul A. Magnuson gazed upon an audience of 1,002 proud, joyful, pensive, beaming New Americans and said, “This nation is going to be a better nation in the future — because of you.” We couldn’t agree more.

At USCIS’ naturalization ceremonies that Tuesday, more than 2,000 individuals from 103 countries became citizens — 138 of them were clients of the International Institute of Minnesota. We also celebrated the milestone with Elaine Olson, an Institute board member who took her Oath of Allegiance alongside the New Americans for whom she advocates.

“Every immigrant has a real, unique story to share,” Elaine reflects, “but to be able to have this shared experience with the people we are privileged to serve and work with at the Institute, makes the urgency and the importance of the work of the Institute so much more personal and meaningful to me.”

Elaine was born in Nicaragua, but as the nation erupted into war, she left to seek safety — first in Costa Rica and then in the United States in 1990. Milwaukee was her first U.S. home and where she graduated from high school and spent time giving back as a teacher and nonprofit professional. Later, she went to law school and practiced for several years in Wisconsin before moving to Minnesota in 2007.

As an immigrant herself, Elaine felt called to join the Institute’s board: “Being able to have a way that I could give back to create opportunities for other immigrants really resonated with me.”

After decades building her life, family and career in the United States, Elaine decided she wanted to apply for citizenship. Thinking about her children, she asked herself, “What can I do to influence their future and make this a better place?” Elaine recalls. “And one of the things I’ve never been able to do is vote, and that became to me ultimately the reason — to be able to really be a full part of society.”

Even though she had already been an active community member as a student, professional and volunteer, “becoming a citizen was the last step,” Elaine reasoned. “This is one more way that I can give back to this country and that I can make my voice just a little bit louder.”

Like many immigrants who become new citizens, Elaine now feels more confident in expressing her voice. As for the fact that she can vote in the upcoming elections? “What a privilege, what a gift,” she muses. “I think of so many other countries where your vote really doesn’t count,” but in the U.S. you are “able to elect your leaders and have an impact.”

During the ceremony, Elaine “was struck at how little the world really is. Here we were from 103 countries and my neighbor happened to have been born in Honduras,” a neighboring nation of Nicaragua. “No matter where we come from, we all have a shared dream for humanity — to leave this world a better place, to make peace and be at peace, and to love and to be loved,” Elaine reflects. “That is really the mission of the Institute in so many ways — to give New Americans the opportunity and pathway to be part of, make a home in and give back to this amazing country.”

Peeking back at the audience where her husband and three young children were watching their mom take her oath, Elaine got a little teary-eyed. “I got this kind of rush, thinking, wow, I’ve lived here for a really long time and to finally take that last step to say, ‘Yeah, this is home. It’s my chosen home, and that feels really great.’”