Students Speak: How Can We Work Toward Gender Equality? 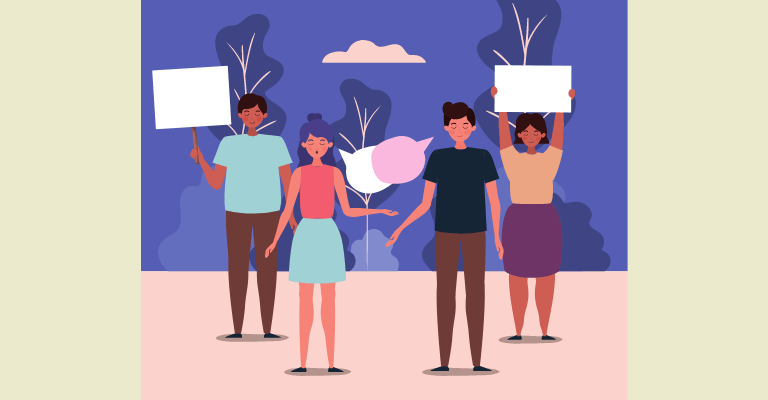 During Women’s History Month and in recognition of International Women’s Day on March 8, we asked our English students to reflect on the following question: How could the world be more fair and equal to people of all genders?

“I want to write about the economic impacts regarding gender equality in the world. Around the world, women don’t have opportunities to earn money, to start a business or company, to occupy a higher position in a company. In my opinion, if we can give the same opportunity to all people according to human rights especially to women for building their own companies, it will be fair and equal rights. In many countries, women continue to be underrepresented in high-level, highly paid positions and overrepresented in low-paying jobs. Many women cannot take care of themselves. They wait for help from a man or an organization. The economic impacts of gender inequality are a huge issue in many countries. It is time to commit to act for gender equality in the economic or business fields.”

“I think that the fundamental problem is the education of the female gender. I take the case of the African continent in general and of my country Cameroon in particular. The government has long considered women in second place, the ones who must stay at home and take care of the household without being financially independent.”

“Humanism. Human rights. I think that a more fair and equal world for all genders is possible and can be achieved when we all understand that rights go beyond gender. If we all change our way of seeing and labeling ourselves as ‘woman’ or ‘man’ and we all accept ourselves as human beings. I think it is not a competition to see who is stronger. In my opinion, it is about equal conditions and opportunities for both. We don’t need to ‘discover warm water,’ we just need nations to comply with the Declaration of Human Rights.”

“First of all, the world is composed of around 200 countries, and each of the countries is at a different level in terms of economy, education and political structure. And what is more, inside each country, people living in different areas have great differences in their economical, educational and social level. So it is needed for those advanced countries to help those undeveloped countries to follow up as quickly as possible. In this case, the UN and other international organizations have a lot to work on.

However, it also calls on undeveloped countries to help themselves instead of just relying on foreign or international help. They ought to make a hard struggle to catch up. Next, female people usually are in the weaker group who are treated unfairly and unequally worldwide. My point of view is that we need to cooperate to deal with this issue domestically and internationally. By cooperation, I mean that women are well aware of the issues existing everywhere in their society and in the world, so it is their task to fight in cooperation constantly. Also, I mean government and society and world organizations need to do more in the future.”

“For gender equality, we need to improve education for men and women’s positions at home and in society. About 40 to 50 years ago, in Korea, boys could be given school education from elementary to college if they were able to afford it financially and according to their ability, while girls could not, because women should stay and take care of children and do domestic work and did not need high education to do housework. However, now the world has changed.

In prehistoric times, men were breadwinners by hunting, and women took care of children, cooking, and some chores at home. Such a tradition was handed down through generations. Even nowadays in some countries they still have that tradition and want to keep it. In my opinion, we need both school and home education to change our children’s consciousness or typical thoughts on women and men from childhood.”

Daisuke I., Institute student from Japan:

“We need to understand how women are treated unfairly in the world. Which is to earn money, to get a higher position and discrimination. Most people do not realize it, so we need to change women’s rights. We need to listen to the real voice which is speech because it is a power of impact. We have to listen face to face. It is difficult to understand just listening to TV, internet and radio.”

“In many countries, only men have the right to inherit the family’s assets. There are also a lot of injustices to women; in addition, women need to deliver many sons. Women should have the same opportunity as men. Education, jobs. If we had more women’s organizations, the world would be better!”

“The society and communities could be more fair getting the balanced participation of [all] genders’ perspectives in the roles of communities and taking decisions; considering the equality and equity balance principle.”