Congresswoman Betty McCollum visited the International Institute of Minnesota’s newly expanded headquarters in early August, while taking time to speak with both students and staff.

McCollum toured classrooms full of students, spoke with Refugee and Immigration Services staff and answered student questions with generosity and warmth. The Institute is “a place that not only welcomes you, but it embraces you in a very special way,” McCollum told a room of about 40 students in the Hall of Nations.

She also shared that while her own ancestors were welcomed as immigrants generations ago, they did not have “a beautiful place” like the Institute to help them.

When the Institute began work with JDD Studios to renovate and expand our headquarters, a main goal was to create a safe and visually welcoming space for New Americans. McCollum’s recognition of this work was a full circle moment — considering it was the congresswoman who secured $1.5 million in federal funding to help make the Institute’s expansion possible.

As a result of that appropriation and generous donations, the Institute added more than 16,000 square-feet to its existing building. That includes six new classrooms, new interactive training labs and additional offices. The Institute reopened to students and clients this spring, allowing us to increase workforce trainings and educational programs, while serving at least 3,000 New Americans each year.

McCollum began her visit by greeting Jane Graupman, Executive Director of the International Institute of Minnesota. She also met with community leaders such as Jerry Hammer, General Manager of the Minnesota State Fair and Eric Nesheim, Managing Director of Digital Strategies for Literacy Minnesota. They discussed the recent history of the State Fair land where the Institute now resides, and how Hammer was a champion of our mission to build here.

Brooke Antilla, Program Manager of Medical Career Advancement, shared with McCollum about the program’s growth to include support and guidance for immigrant medical graduates.

As she ended her visit, McCollum thanked the gathered students of the Institute’s Nursing Assistant Training, Hospitality Program and English classes. “You make the United States a better place. We’re blessed to have you,” she said.

We are grateful for McCollum’s ongoing support to help the Institute expand not only our building, but also our work with New Americans. 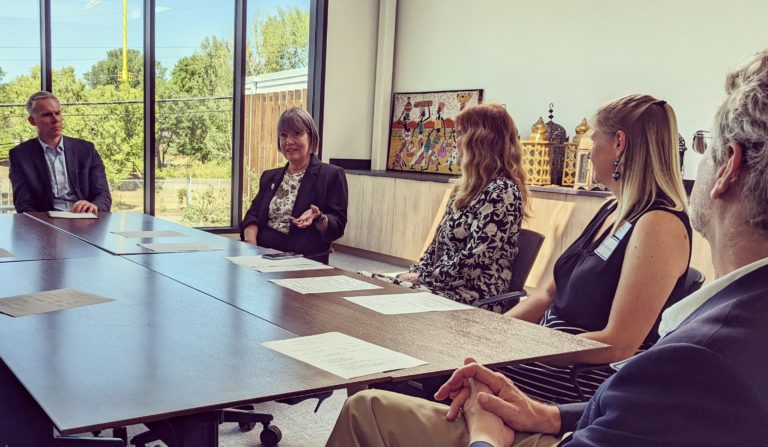