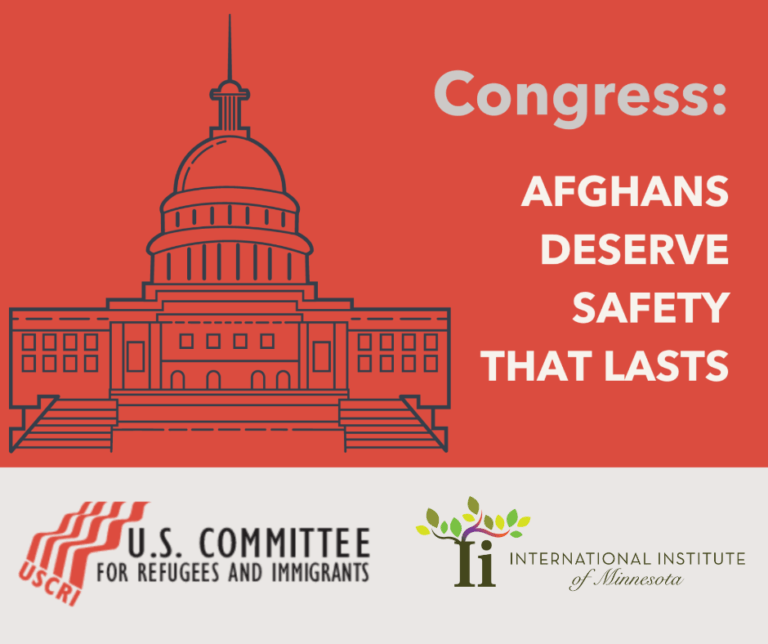 January 4, 2023 | As Afghans living in Minnesota face uncertainty about their future in the United States, the International Institute of Minnesota is appalled at the failure of Congress to vote on the Afghan Adjustment Act before the end of 2022.

The majority of Afghans who relocated to the U.S. since August 2021 were admitted into the country on humanitarian parole. Parole is temporary, without lasting protections for work or residency in the U.S. While many Afghan evacuees applied for Special Immigration Visas or asylum, processing those cases is backlogged.

The Afghan Adjustment Act would provide Afghan allies who worked with U.S. forces a pathway for becoming lawful, permanent residents without fear of having to return to Taliban-controlled Afghanistan.

“Those who worked with U.S. forces risked their lives by doing so. Now, those individuals and their families face grave danger if forced to return to Afghanistan,” said Jane Graupman, Executive Director of the International Institute of Minnesota.

“Passage of the Afghan Adjustment Act is imperative to support Afghan newcomers who have already begun rebuilding their lives in Minnesota. The stress of living with temporary status after all that Afghans have been through is not the comforting reception intended. They deserve a pathway to residency so they can find meaningful work and move forward with their lives,” Graupman said.

The Institute has worked tirelessly to support Afghan parolees who escaped Taliban rule. We will continue to serve them with access to important benefits, legal representation and other assistance.

The bipartisan Afghan Adjustment Act, which was sponsored by Minnesota Sen. Amy Klobuchar, is expected to be reintroduced as the 118th Congress begins its new session. The International Institute of Minnesota urges Congress to act immediately.

Learn more about the Afghan Adjustment Act from the Institute’s parent agency, the U.S. Committee for Refugees and Immigrants.