International Institute of Minnesota calls on the Administration to reinstate U.S. leadership through the Refugee Admissions Program

The International Institute of Minnesota and USCRI

The International Institute of Minnesota echos the statement of our national organization, USCRI, regarding today’s announcement about refugee admissions for 2019. We urge our supporters to contact your federal elected officials and ask them to weigh in immediately with the administration around a robust refugee admissions goal.

The U.S. Committee for Refugees and Immigrants (USCRI) urges the Administration to set a higher number of refugee admissions for fiscal year 2019. “We’re disappointed in today’s announcement of 30,000 refugee admissions for next year given the magnitude of the worldwide refugee crisis. The U.S. Refugee Admissions Program is a crucial element of our nation’s humanitarian, foreign policy and national security strategies and reflects American history and values,” said USCRI President and CEO Eskinder Negash. “For some refugees, regional resettlement is simply not an option – safety cannot be guaranteed in countries they first flee to because of their specific situations, lack of refugee protections or other persecution.”

Across the country strong support for refugee resettlement is exhibited every single day through community volunteers, local employers, faith-based partners, and neighbors. The decision to further lower the numbers of refugees is contrary to both strong U.S. community support and the global needs of resettlement solutions for vulnerable refugees.

“Throughout our history refugees and immigrants have been welcomed to America by presidents from both parties in war and in peace and the current global refugee crisis is no time to shrink from this leadership. Over 3 million refugees have been safely resettled in the U.S. since the 1980 Refugee Act and everyday our agency hears their thanks and sees their contributions to America,” said Negash.

The United States government hand picks every single refugee who enters the United States. U.S. refugee admissions is a tough, thorough, thoughtful and lengthy process involving continuous rigorous security screenings that already includes in-person interviews. Since its inception, security reviews and updates have been an integral part of the refugee processing program and hindering the program now with additional burdensome process is unwarranted.

With the changes proposed, hundreds, possibly thousands of individuals and families whose lives are in danger and were already vetted, approved and promised refuge by the U.S. government will now need to unnecessarily restart the process. Families will continue to be separated for no apparent reason. These program disruptions will have severe long-term consequences for nearly every refugee awaiting safety.

“USCRI remains ready welcome refugees to the U.S, like we have done for over 100 years. Each refugee welcomed is a life saved,” said Negash. 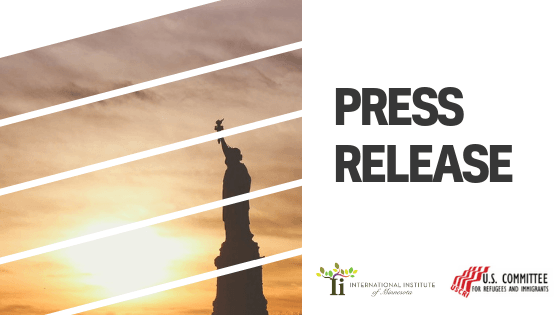